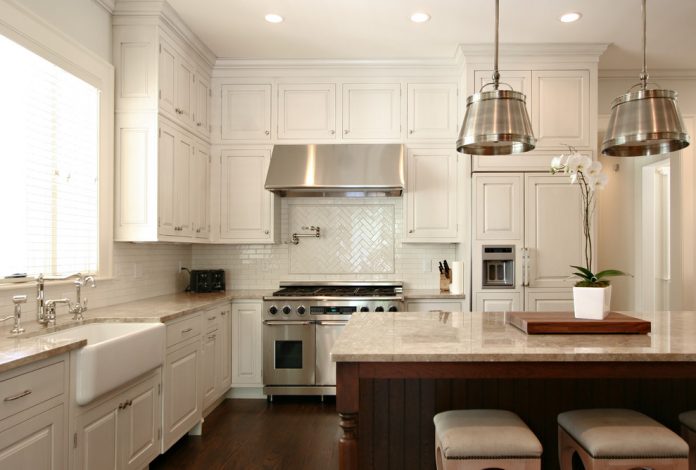 There are a number of other rules that go along with designing a kitchen work triangle. Some are more of suggestions rather than rules.

The L-shaped kitchen also provides good placement options for your appliances. It is easy to make the triangle work in this layout but keep the third rule about obstructions in mind because L-shaped kitchens so often feature larger islands.

The galley kitchen is usually a little more constrained than the other two popular layouts but it too can utilize the kitchen work triangle and maximize efficiency.

Unfortunately the kitchen work triangle is not always possible. In small apartments, the lesser rules that dictate the desired counter space that should accompany each major appliance is optimistic at best. Even if you lack the space needed to have a truly efficient work triangle, you can still have a fairly usable kitchen by sticking to as many of the rules as possible.

In many of today’s more modern kitchen designs, there has been a slight departure from the kitchen work triangle. New homes are being designed with one great room that combines the living room, dining room, and kitchen into one open space. These open designs often focus more on the kitchen as a social area for entertaining. Large areas of the kitchen are reserved for bar-like dining areas on the back sides of peninsulas or large islands.

I never put much stock in the idea of the work triangle until I moved out of my parents’ house. As someone who likes to cook and bake, I was fortunate to grow up in a house with a nice U-shaped kitchen that adhered to the kitchen work triangle. The left run had a large spacious cooktop, the right run was a massive pantry area with the refrigerator, and finally, the sink was centered on the middle run of the kitchen. My mother often wished for a kitchen island but I doubt there would have been adequate space for it. A stark contrast to that kitchen, the house I currently live in has a kitchen that, from a design standpoint, is barely functional.

My current kitchen has a small galley layout with a sink centered on one run while the range and refrigerator both sit side-by-side on the end of the other run. At best, the longest side of the “triangle” that is formed by this design is about 4 feet. This workspace is entirely too small but to make matters worst, the tiny triangle is also a major intersection of a hallway, kitchen, living room, and the only working bathroom in the house.

If you are planning on remodeling your kitchen you should think about all the rules of the kitchen work triangle. Even if your particular needs do not require a traditional work triangle design, keeping these rules in mind will help you design a layout that will be efficient enough for you to enjoy the time you spend in your kitchen.

What Kind of Kitchen Layout Works for You?

The Kitchen Remodel, Step by Step