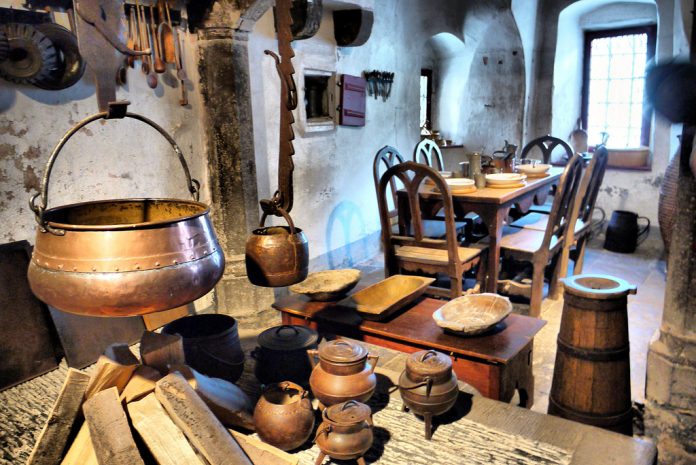 Preparing food in the Renaissance era

Ah, the Middle Ages. When the men were men and the women were helpless. The rich were snooty and the poor were dirty. The water was muddy and the food was… excellent?

Of course, there is more information about the meals prepared for the upper-class of renaissance society than for the everyman because surviving cooking resources from the period focus on making dishes for nobility. Meals for the members of high society was a big ‘to do’, detailed projects that involved a number of workers. It’s only natural that they would have spelled everything out on paper and have it published. Sadly, there is very little about cooking for the lower class, although we do know that their meager households generally contained a kettle, an iron spit (for roasting over a hearth) and a skillet. 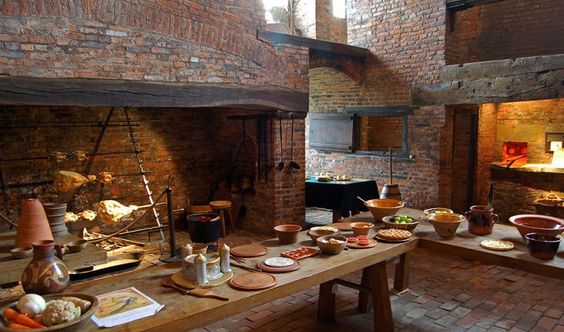 The kitchens of the rich were much grander, obviously. The primary tools used included knives, mortars, pestles and strainers and colanders. There were cauldrons, frying pans, metal grids, waffle irons, cleavers, tongs (to cut sugar), even tubs for washing. Also likely to be found would be bunches of twigs, used for scouring. Scales, rolling pins and cheese graters were not uncommon, either. 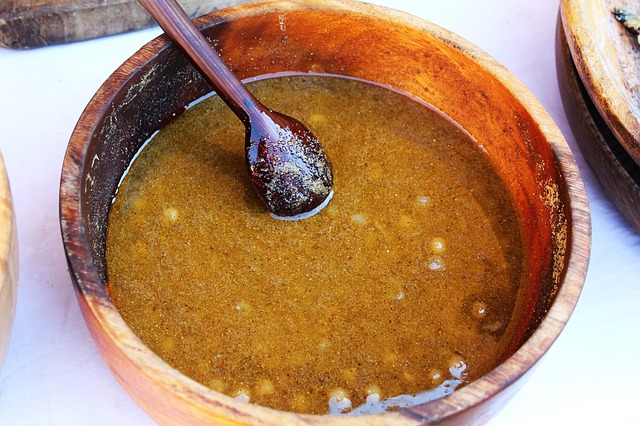 All in all the equipment was very similar to what a kitchen uses today. Large meats would be cooked in the cauldrons, hanging pans would fry the fish, and larger pots were used to simmer soups. It featured many modern elements.

To give you an idea of how well stocked each ‘department’ was, the space for making sauces alone was of an advanced nature. It contained up to twenty frying pans, a dozen large casks, fifty small casks, sixty bowls with handles, a hundred wooden bowls, a dozen grills, six large graters, etc… besides a myriad of spoons, shovels, and rotisseries. 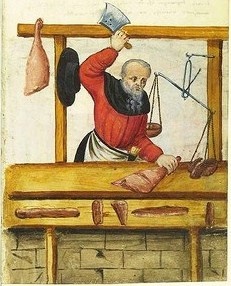 Everything was done in-house, including the butchery. Large two-handed knives were used to dismember cattle. And countless other knives would prepare the poultry and fish. It was not uncommon to have gutted animals lying about, while rabbits roast on a spit (a long rod used to hold food while it is cooked over fire).

In less organized kitchens it would not be uncommon to find a great volume of pots and pans stacked tall, extending from upon the floor, almost haphazardly. But of most notable absence is the lack of a temperature gauge or clock that indicates the most profound difference from then and now. According to the old cookbooks, the directive was simply often to cook until “golden” – which meant “done”.

And contrary to the filthiness many associate with the era, resources describe the kitchens of manors and palaces as having been kept clean, aggressively so. Surviving manuals stress the importance of sweeping daily and keeping the areas neat. It was a legitimate concern and everything within their means was done to promote a clean area. 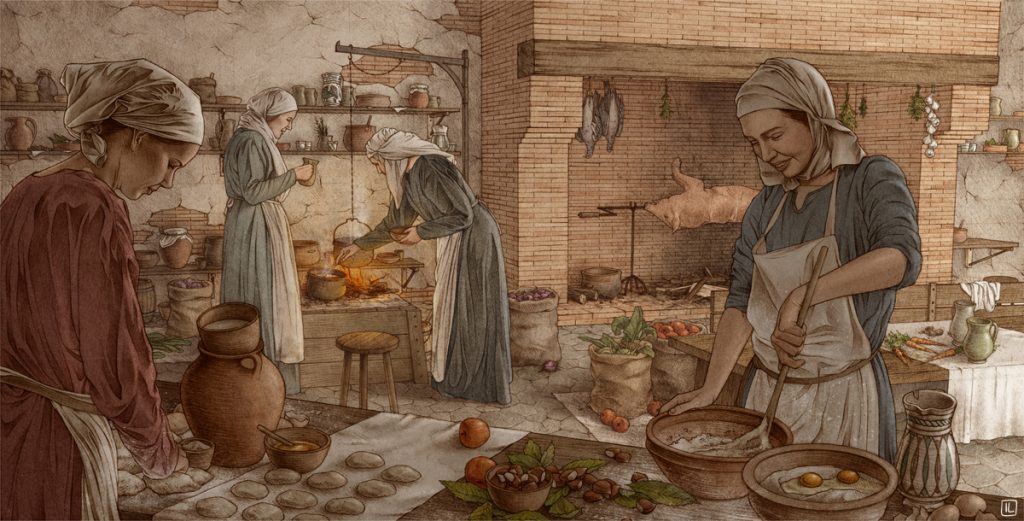 The kitchen accommodated intricately organized operations spread over a number of rooms, with servants each undertaking several tasks. A day’s meal was comprised of hours of manual labor on each of their behalves. You had the hateur, in charge of roasting, the potier (manager of pots and dishes), a person to simmer the sauces, and a potagier to maintain the pots of potage. Manning the mortar was the broyeaur while the souffleaur tended the fires.

And there were yet more kitchen workers. Unskilled labor chopped and hauled wood, and drew water to wash dishes. You had others shaping pasta, kneading bread, forming the pie crusts and even sharpening knives. Interestingly, it is believed and pretty much confirmed that women were not included in such kitchen affairs. While this would almost certainly make the modern feminist happy, the reasoning probably would not. It was believed that women simply could not endure the physical labor involved. 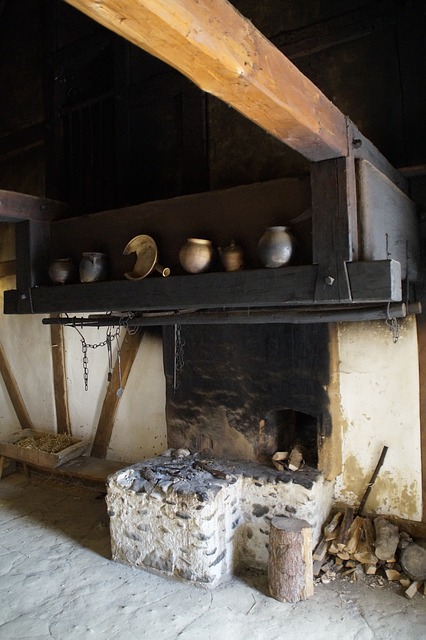 The structure of the kitchen was most often wooden, but they came to be preferred and greatly appreciated when built from stone and brick. English and French manors would often separate the kitchen from the manors to avoid a kitchen fire from spreading to the home. 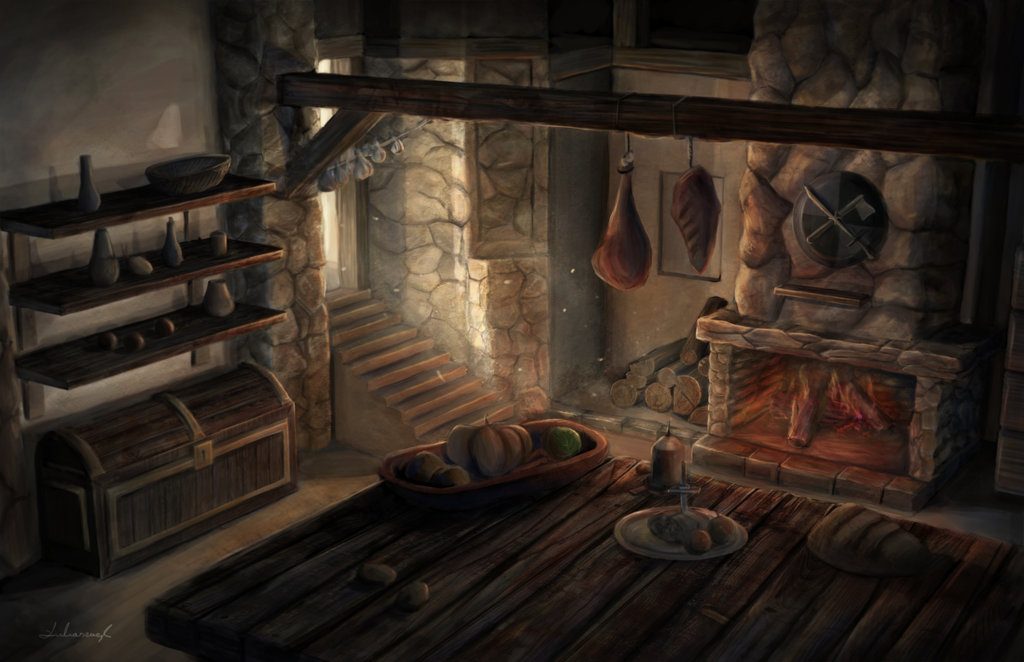 It should be noted that the architecture and layout of those early kitchens was impressive. Comprised of several spacious rooms with high ceilings, you would find busy shelf-covered walls cornering lots of open space, and even early versions of a sinks. Upon the floor (sometimes bare earth, sometimes stone or tiled) were worktables and chopping blocks. Elevated windows provided plenty of light and hoods over fireplaces vented the smoke. Naturally, ventilation was an issue, as some kitchens had but a single hole in the ceiling from which to filter the exhaust out. But original artistic renderings typically depict chimneys drawing the smoke away safely.

Within the kitchen were also rooms for storage and other capacities – such as a place to beat spice into powder, a dry fish house, a pastry bake house, a boiling house and, of course, cellars to hold beer wine and, peculiarly, poultry.

Stove tops and ovens were separated from one another. Back then, a stove could be a long bench made of masonry stone built to hold deep containers. Often, it was lined with iron or ceramic. Charcoal was the fuel most used to heat the variety of furnaces. 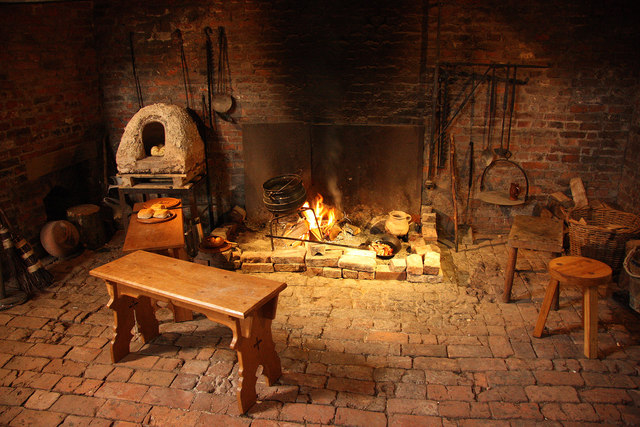 But it was the fireplace the hosted the majority of cooking activity. It was wide and shallow, complete with a chimney and hood. It was designed with a series of iron pothooks that would control the height level of the pots over the flames. Of course, grills were used often as well.

Minus the lack of refrigeration, European kitchens of the Middle Ages managed to maintain a well-stocked fresh food supply while producing a wealth of tasty meals. It certainly is likely that a high class dining experience during the Renaissance age would have been one of exquisite sensory pleasure. So flavorful, in fact, that countless cooks even today continue to attempt to emulate recipes from that bygone era.

Can I Please Get a Kitchen Island?