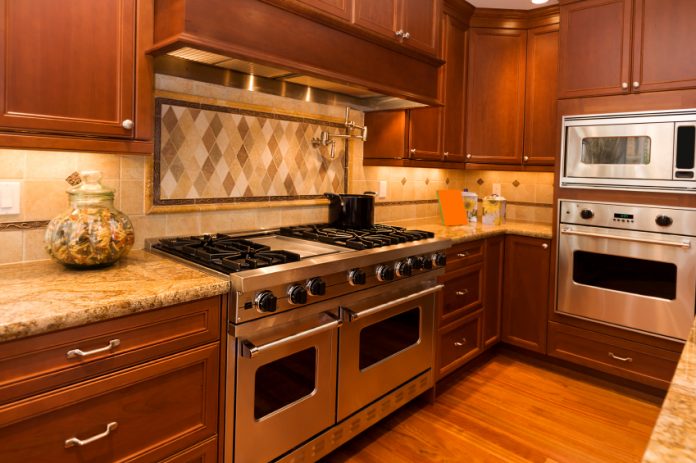 For thousands of years, humans have taken their food and cooked it in pots and pans or baked it in some kind of oven.  It seems logical to assume that after cooking meat directly over flames there was probably a desire for some kind of soup which lead to clay pots that were held over fires.  Once you have a big clay pot for cooking it probably didn’t take long for people to venture into shallow pans and skillet like devices and larger clay enclosures that would eventually evolve into ovens.  I’m sure metal was a game changer, just like gas and then electricity, and eventually aluminum foil and microwaves and induction cooktops.  The kitchen has evolved more than any other room in the house and most of that is because of appliances.  If you are tired of your current appliances or if you are doing some kind of kitchen remodel, there are a lot of options out there in regards to your cooking appliances.

In general, taxonomy is overlooked and underappreciated in most aspects of life, so let’s start with some basic terminology and clarification.  For the most part, all kitchens have some kind of cooktop and some kind of oven.  Most kitchens have these two appliances combined into one appliance in the form of a range.  If you are confused about “range” and “stove” don’t worry because they are synonymous.  If there is ANY difference between the two terms, that difference is less significant than commonly confused interchangeable terminology like “supper” vs “dinner” or “dresser” vs “chest of drawers.”

As a passionate consumer of multi-tools, I appreciate nearly anything that can 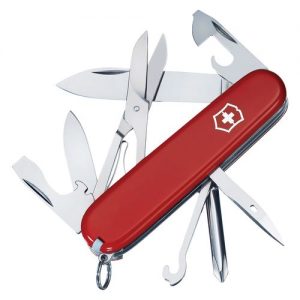 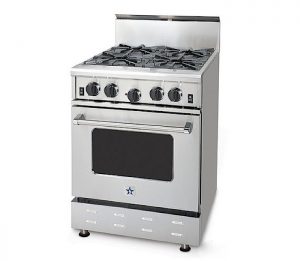 fulfill the roles of two or more other items and particularly when this is accomplished without compromising a lot of the function to achieve multiple purposes.  A range or stove is a 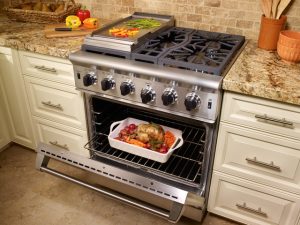 single appliance that achieves the work of a cooktop and an oven with no real observable compromise in performance.  In fact, as you start to sketch out your kitchen plans and you start placing where you want each appliance and cabinet within your kitchen; you will notice that using a range or stove can really save you a lot of space.

The oven is the best way to cook many of the greatest kinds of food.  An oven cooks using convection.  This means that the air in the oven is very hot and it heats the food 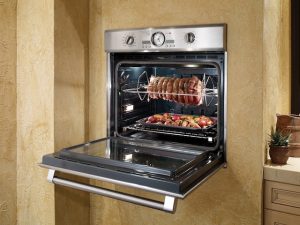 as it flows around it.  If you buy a “convection oven” then that just means that your oven will have a fan that will blow heated air over the food so that it will cook significantly faster.  Ovens can be powered with gas or electricity.  Some people prefer gas appliances because of the low cost and eco friendly nature of natural gas, while many avid bakers prefer electric ovens because they can maintain a more even temperature and you never have to worry about the pilot light going out.  Regardless of whether or not they are in a range, some ovens have a self-cleaning feature.  This means that they can get hot enough to burn any spilled messes into ash.  You can then wipe the interior of the oven with relative ease.  This feature can be great for anyone that bakes a lot, but it does leave some ash residue so don’t think that you will not have to physically get in there and wipe up the mess like the term self-cleaning implies. 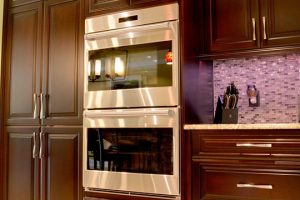 double oven.  This can be extremely helpful when you are preparing for a party or when you are cooking a big feast like on thanksgiving.  Growing up my mom had a wall mounted oven with a microwave but every year around thanksgiving I would hear here talk about how long the turkey was going to be monopolizing the oven.  Sometimes an oven will be installed in a cabinet like if it is on an island, but most of the time ovens are wall mounted.  Because every intelligent kitchen designer strives to make use of all the available space, you usually see wall mounted ovens as double ovens or paired with a microwave.

Modern man’s solution to lighting fires inside the house.  The cooktop is the indoor flame.  (Quite literally if you have a gas powered cooktop) When I wrote an article about outdoor kitchens and grilling, I talked about how the various cooking methods cook your food in different ways.  Unlike cooking in an oven, the cooktop heats your food using conduction.  Many meals turn out best when cooked on the cooktop.

There are exceptions to this, of course, but usually a cooktop will give you a slightly more spread out and open setup than what you can expect from the cooktop area on a range.  The main reason people choose to get a separate oven and cooktop is that with these two cooking appliances in two spots you can have one person standing in front of the cooktop while someone else accesses the oven without the two people interrupting each other.  If the two appliances are far enough apart they might not even share counter space.  Another advantage is that you can keep your pots and pans right below the cooktop itself so it will be extremely convenient to reach for them.

There are three types of cooktops; gas, electric coil, and induction. 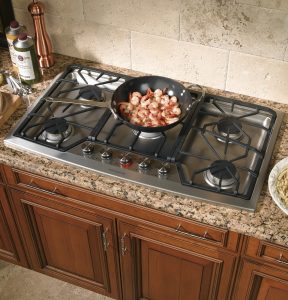 The gas cooktop uses natural gas to fuel an open flame that heats you pots and pans.  Gas cooktops get hotter faster and they get hot enough to cook with a wok.  With gas cooktops you also a lot of control over the flame in low heat settings.  These are some of the reasons why most chefs prefer to cook exclusively on gas ranges and cooktops.  You will really notice the benefit of gas cooktops when you boil water so quickly.  (Nobody has time to wait for that)  Natural gas is a byproduct of the oil refining process which is why it is so cheap.  This also makes it a fairly “green” product considering the fact that it is made from petroleum.  Since natural gas is directly used to power gas cooktops it is more eco-friendly than electric cooktops. (or at least it will be as long as we are generating most of our electricity by burning coal)  Some people might be worried about the dangers of gas leaks (the silent killer) but as a safety precaution a scent is added to natural gas (a naturally odorless gas) so that you can detect any leaks before you are asphyxiated. 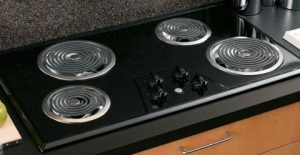 As the name should imply, the coil cooktops use metal coils that turn red hot when you run an electric current through them.  This is a good method for heating your food.  SOME coil cooktops are easier to clean than some gas cooktops.  It really all depends on how difficult it is to remove the coil and clean underneath.  Although natural gas is very cheap it can be nice to have an all-electric home so that you have one less bill to pay. 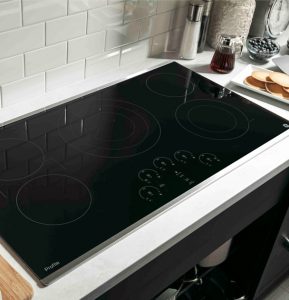 It is truly a brave new world that we are living in.  Induction cooktops are very cool.  These cooktops are smooth unbroken surfaces with rings designating where the “burners” are for you to place your pots and pans.  Under the surface, an electric current is run through a coil that creates a fluctuating magnetic field.  This excites the molecules in the metal pan above causing it to get hot.  There is no actual heat coming from the “burner” but the pan gets hot.  This means that you can touch the surface near the pot or pan without getting burned. 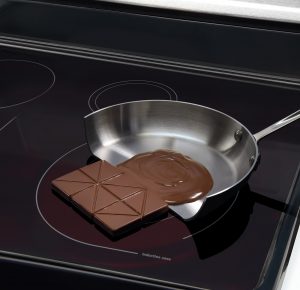 The area that the pot is touching however will heat up simply because it is touching the bottom of the pan.  Even though the stove is heating the pan through the space aged technology of induction, the meat (or in this case, chocolate) inside is being heated through its contact with the metal pan so this is technically still a form of conduction cooking.  The major benefit to this kind of cooktop is that they are BY FAR the easiest to clean.  The surface will cool quickly after pots and pans have been removed and you can then take a sponge, washcloth, or paper towel and wipe with ease.  Another less talked about advantage to this cooktop is the fact that when not in use, the surface of an induction cooktop doubles as perfectly usable counter space.  This can be a big plus to those living with very small kitchens.  The biggest downside of these cooktops is how long it takes to get hot.  Most induction cooktops are the slowest to boil water.  They also work very poorly with copper pots and pans.

As if the terms for this things were not complicated enough, there is an appliance called a Range Top.  One benefit of a range is that the control knobs can be placed on the front of the unit, maximizing the space for the burners.  A range top is essentially the 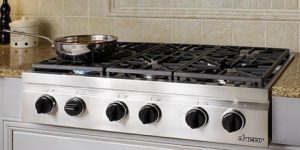 same thing as a cooktop in that it is just the cooktop portion of a range. (no oven)  The difference is that a range top will be quite a bit thicker than a cooktop.  They are installed into the cabinet and have a few inches of space for the control knobs at the face of the appliance.  Usually range tops tend to be more expensive and more of a high end product when compared to the majority of cooktops.

There are some ambitious companies out there that provide you the option of the hybrid range.  This would be an electric oven with gas burners.  This setup gives you the benefit of an electric oven that is usually more consistent than gas ovens, and you still get the gas cooktop that chefs prefer for stir fir and other dishes.  The major downside of the hybrid range is the price.  They used to only be available in the professional high end ranges that you find for $4000 or more.  Now you can get some for as low as $1500.  That’s still a little steep for my taste.

A toaster oven is technically an oven so it should at least be mentioned.  Toaster ovens are tiny countertop appliances that perform the same functions of an oven.  Their 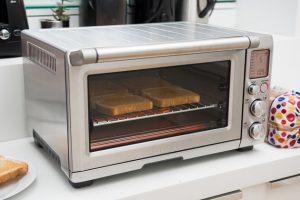 tiny size makes them very convenient for small jobs like toasting bread or baking 4 cookies.  Toaster ovens are a staple of the average workplace break room and just about any college dorm room.  Some high end toaster ovens even have a small coil burner on top effectively making them tiny ranges.

Some space-saving options have been made over the years like this crazy stovinkerator.  This is a stove and oven in one like a range, but it also features a small refrigerator with a tiny pub sink on top. 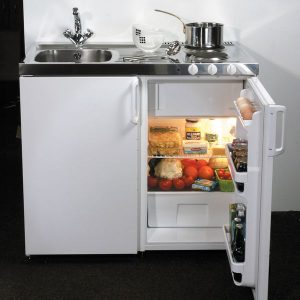 The very nature of this seems troubling because your refrigerator will be sharing a wall with your oven but I would be willing to try one.  You usually see these kinds of appliances on boats and camper vans.

What is your kitchen cooking appliance of choice?  Whether you prefer the cost and space saving benefits of a range or the various benefits of having a separate cooktop and oven, hopefully this information can help you make a decision. 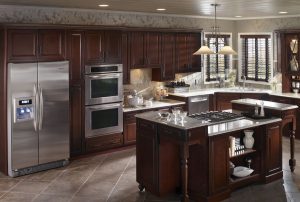 Chair Rails, Baseboards, and Other Moldings