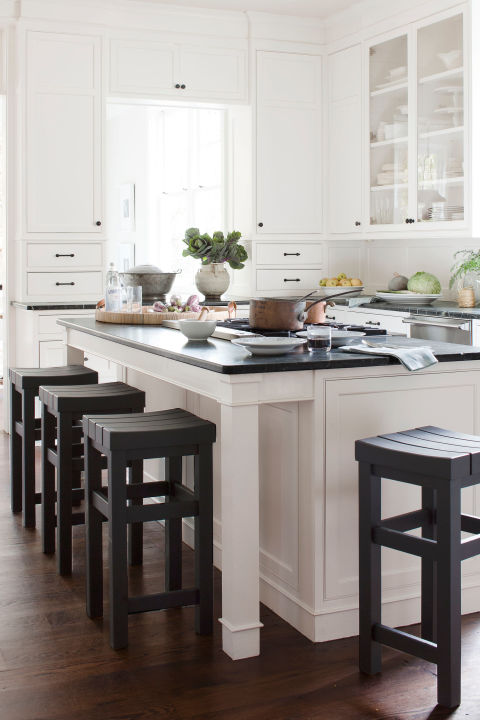 Kitchen islands are almost universally considered a selling point and/or status symbol within your kitchen.  They are popular and for good reason.  Having a well-designed kitchen island can greatly improve the look, and most importantly, the function and workflow of your kitchen. 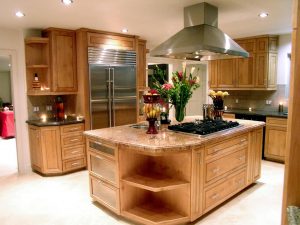 In a previous article about U-shaped kitchens, I mentioned that when I was growing up, my mother always lamented that our kitchen was not just a little bit bigger so that she could have a nice kitchen island.  I firmly believe that there are many other people out there that feel the same.

Adding an island can make such a difference to your kitchen because you are adding a lot of convenient extra prep room with such a small addition.  The actual square footage of countertop surface area is important but not as important as practical usable feet of countertop that people can make use of.  For example:  If you had a simple L-shaped kitchen with about 12 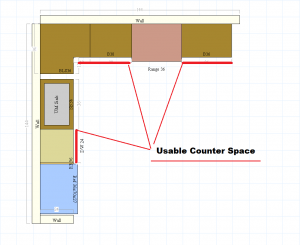 feet on each run of cabinets, then after the sink, the stove, and a refrigerator in the corner, you are probably left with about 8 feet of counter space that is unoccupied; and that will probably be enough for 2 work stations at best.  If you were to move walls you might be able to add 3 feet (12 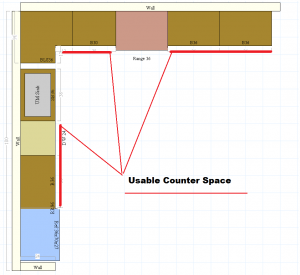 square feet) to both of the runs.  This would be a major construction project and it would make your kitchen a LOT bigger but it will only really add 6 more feet of usable counter space.  If instead you had added a 3×5 island in the middle of 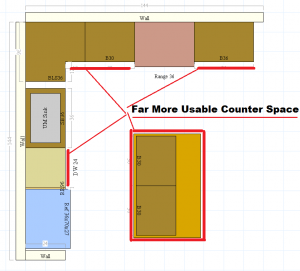 the room, (15 square feet) then you now managed to add about 16 feet of usable counter space.

Unfortunately you can’t just add a kitchen island to every kitchen.  They need space.  If you add an island and you don’t have adequate room it can be a frustrating waste of money that made your kitchen less efficient, AT BEST, and a potentially deadly fire hazard, AT WORST.  There are a bunch of rules and guidelines to adhere to when designing a kitchen island.  The only rule that seems to matter to me is that you need to leave 3 feet of space on all sides of the island.  That’s it.  You can look at the tips I wrote about in an article regarding the kitchen work triangle and the ways to have an efficient kitchen.  But in the end the 3 foot rule is mostly what matters. 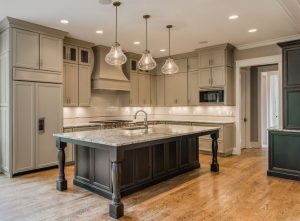 Usually the biggest and most elaborate islands are found in L-shaped kitchens.  Because an island in an L-shaped kitchen will have a side facing away from the kitchen it is very common to see islands with seating areas for informal kitchen dining.

The U-shaped kitchen can usually accommodate an island so long as it is wide enough to fit with the required 3 foot space on all sides.  There is a risk that adding an island to an already complex and full U-shaped kitchen will give off a “busy” feel to your kitchen.  A well designed 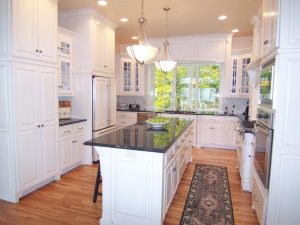 island in the middle of a U-shaped kitchen gives you a channel or pathway to work in.  This can be very efficient.  If you want an island large enough for seating, or full sized cooktops and/or sinks, you will need to have a very large kitchen.  Those kinds of features are usually found in the larger islands that are more common in L-shaped kitchen.

The galley kitchen by design is not suited for a kitchen island.  In my article that I wrote about galley kitchens, I talk about how a properly designed galley kitchen can be safe and efficient because the two runs are close enough to access by simply turning your body around.  So this makes it very difficult to ever have an island in this kitchen design.  Some would argue that a 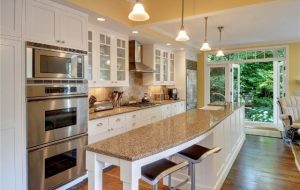 galley kitchen can have an island like in this picture.  But this is really just an open galley kitchen with a wall and upper cabinets removed from one of the runs to make it less claustrophobic.

If your kitchen will not work with the island you want there are alternative options that you can try.  A decent compromise would be to get a wheeled cart that will serve as a small island in the middle of your kitchen.  My brother has used this method with varying degrees of success. 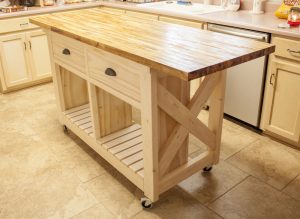 Many such carts have very useful features like storage shelves and butcher block tops.  You can also just add a small kitchen table.  This is more of a cost saving solution because if you have room for a kitchen table you could probably get similar sized island.  If you get a long narrow table on wheels it can be pulled to one side during parties and used as a buffet table.  Many L-shaped kitchens just don’t have the space to fit an island without making it very difficult to work around while cooking.  A possible solution is to take the desired island and add it to the end of a run as a peninsula. 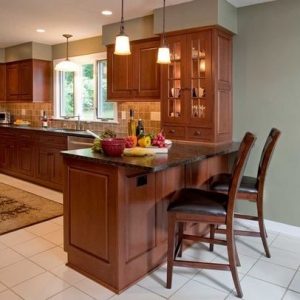 This will give you the extra counter space and storage and still keep the center of the kitchen open.  My dream kitchen would be a medium sized U-shaped kitchen with 8-9 feet of space in the center.  I love the idea of a rolling cart with butcher block on top but I fear that I would allow clutter to collect on the cart and it would become useless to me in the kitchen.  If I had a cart that I could 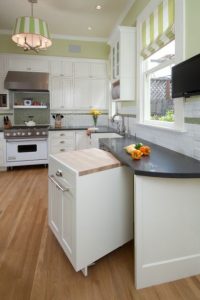 store as part of the kitchen base cabinets like in this picture, I would have an island when I needed it and I could put it out of the way when I didn’t, and when stored under the countertop there is little chance for clutter related problems. 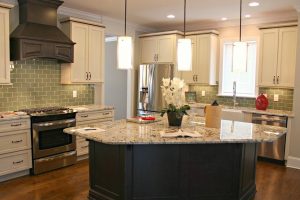 are few things more frustrating than cooking in a poorly designed kitchen, it’s important that you have enough room before you add an island to your existing kitchen.

Top 10 Tips to Choose a Builder and Work Well Together....