For decades now, new homes have been built with more open floor plans and particularly open kitchens.  This usually means that there is one “great room” that has a kitchen in one corner with the living room and or dining room space off to one side.  Even in houses without a “great room” there are fewer and fewer walls to distinguish the major common areas in the house.  For some people, this is a great improvement while others like the older styles.  Regardless of how any of us feel about this trend it is becoming more and more prevalent as time goes on.

In some homes the idea of the great room is taken even further.  Rather than one big room with a clearly defined spaces for kitchen, dining, entertaining, or what have you; some new age kitchens are challenging us to think about how we use these spaces by blending them together.  In most cases this blending is being done by adding elements traditionally found in other rooms into the kitchen itself. 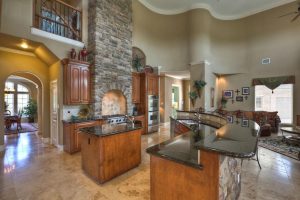 When you combine the mixing of these elements and features with the use of a large space like a great room, it becomes very difficult to tell where the kitchen ends and the other rooms begin.

There are a number of factors that contribute to the kitchen being used as a social space rather than just a place to prepare food. 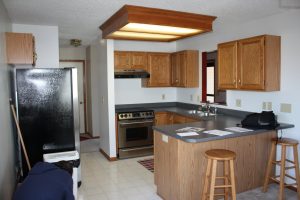 Small eating areas and bar-like countertops have been added to the back sides of kitchen islands and peninsulas for a long time now. 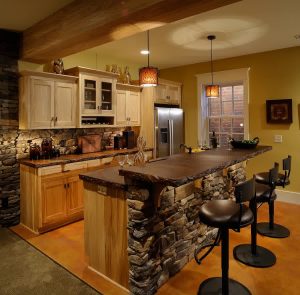 But the growing popularity of the open kitchen design has now made it more common to see these large bar-like counters as a major focal point to the center of the kitchen.

Twenty five years ago it would’ve been very common to see a small 12 inch portable television on the counter in a kitchen so that people could watch TV while they did the dishes or cooked. 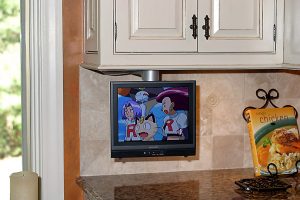 Years later the advent of smaller thinner televisions made it more conceivable to have a small dedicated “kitchen TV” tucked under a counter. 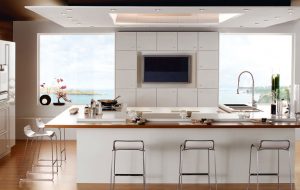 Now in the new age kitchen you might have friends or family spending time socializing in the kitchen so the kitchen TV has been taken to the next level by integrating larger televisions into the cabinets or walls of the kitchen.  The TVs used in some kitchens can be 30-40 inches large; units that just 20 years ago would have been respectable screen sizes for the main family TV in any living room.  These units will often be connected to larger household entertainment networks.

The TV is not the only living room item to meander its way into the kitchen. 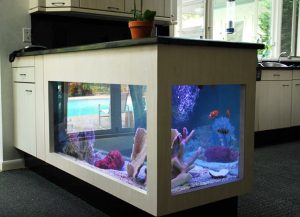 Large beautiful aquariums can be found in new age kitchens. 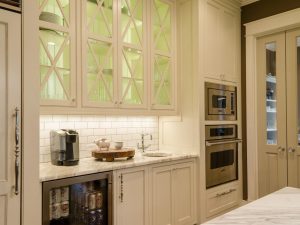 It is not uncommon for small drink stations or wet bars to be near the kitchen but now we are seeing wet bars, and coffee stations integrated right into the kitchen design with the intent for these areas to be gathered around.

As more people find themselves and their families ordering take-out rather than cooking meals at home, the kitchen in some homes is becoming a vestigial part of the home rather than its center. 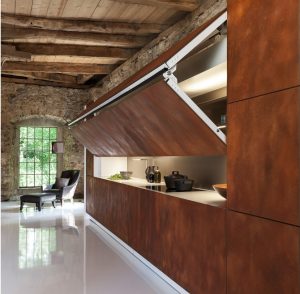 If you throw a lot of social events in your home and practically never cook then this hidden kitchen could be a great idea for maximizing your social space.  This “Bond villain” level of opulence would be an inconvenience to anyone who cooks regularly but could be a phenomenal way to blend your new age kitchen into the other spaces of the house.

The kitchen and the dining room have always been closely linked for reasons of similar purpose.  As it has become more common for families to have two full-time incomes, we have seen a decline in the use of the formal dining rooms.  This has led to that space being used for other things. 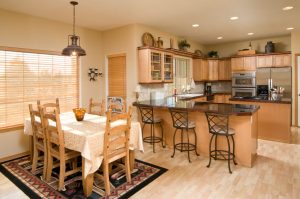 As the use of these rooms decreased, they started getting smaller and less formal over the years. 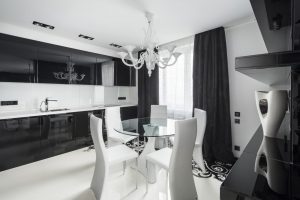 But now we are seeing these two spaces joining as one with kitchens that have all the elements of formal dining rooms within the kitchen space.

Aside from the entertaining and dining areas, there are also work areas like office space and craft tables that are making their ways into the space that was once thought of as kitchen only. 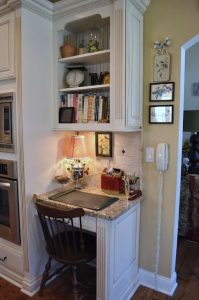 Here you can see a small and simple desk area at the far end of a kitchen.  This arrangement is not uncommon. 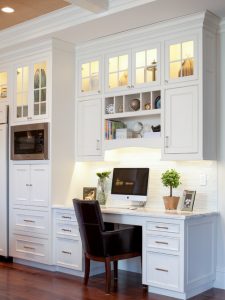 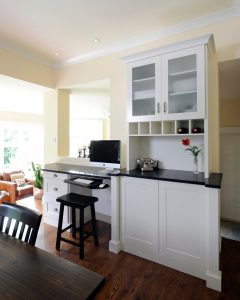 In some new age kitchens there are work areas with computers, desks, and chairs integrated right into the kitchen.

Only time will tell what other household elements will be added to the kitchen.  I for one, am waiting to see a kitchen with a built in Murphy bed or an island that doubles as a Beni Hanna style teppan yaki grill station.  If you are planning a kitchen remodel, or looking for a new home, think about your kitchen space and how you use it.  If your lifestyle is one that involves a lot of entertaining, you might benefit from a New Age Kitchen.  Even If you do not wish to have a kitchen with a massive TV or aquarium in it, you might find some of the elements of the New Age Kitchen helpful or desirable for your own kitchen.

Can I Please Get a Kitchen Island?